The 2019 Scorecard on Insurance Underwriting for Coal Projects was published

An international network of environment NGOs “Unfriend Coal Campaign (*1)” published the ranking of 30 leading insurers worldwide for efforts for climate change and divestment from coal. It shows that insurers with the policy to end/limit insurance underwriting for coal projects such as Allianz, AXA, Swiss Re, Munich Re, Chubb, QBE, etc. rank relatively high, on the other hand, Japanese major non-life insurance companies that do not have such policies: Tokio Marine, MS & AD, and SOMPO rank at the bottom (see Table 1). 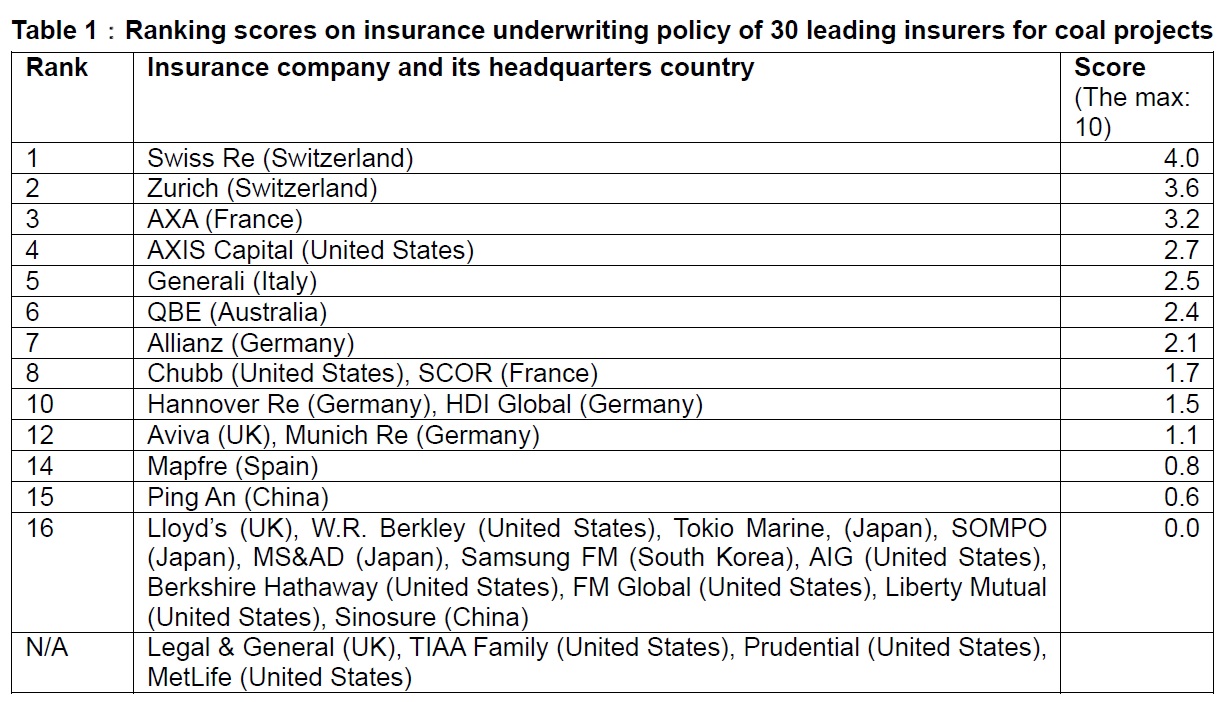 There are 17 insurers with a policy to end/limit insurance underwriting for coal-related projects (14 companies are ranked), and these insurers account for 9.5% of the primary non-life insurance market and 46.4% of the reinsurance market. As of November 2018, there were 7 insurance companies in Europe that had such a policy, but over the past year, 10 more companies, including those in the United States and Australia have set new policies – it became clear that the trend of divestment from coal is accelerating (see Figure 1).

Figure 1: Changes in insurance underwriting policy and market share for the coal projects over the past three years 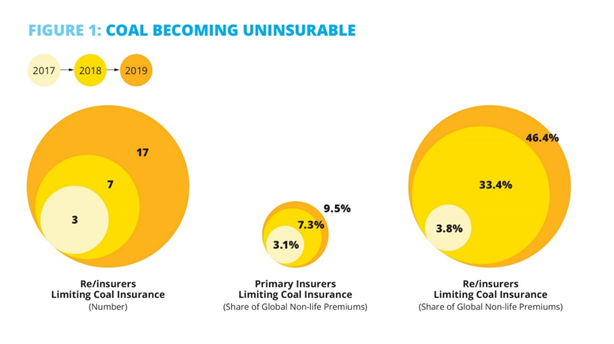 On the other hand, major Japanese non-life insurance companies: Tokio Marine, MS & AD, and SOMPO continue to underwrite insurance for coal-related projects, and do not have a policy of divestment from coal. In Japan, insurance premiums rose by 6-7% since October 2019 with accompanying increased insurance payments due to more extensive damage caused by typhoons and floods in 2018. In addition, insurance payments increased further due to the typhoon damage in the summer of 2019, and re-raising of about 5% of insurance premiums is being considered in January 2021. While Japanese non-life insurance companies seem to have suffered from serious damages in their management due to climate change, they still continue to undertake insurance for coal-related projects, which contributes to the impact of climate change getting worse – meaning they make their sustainability in business weaken by themselves.

The Unfriend Coal campaign calls on worldwide major insurance companies including Tokio Marine, MS & AD, and SOMPO to stop insurance underwriting and investment in coal projects and coal-related companies in order to ensure consistency with the long-term goals of the Paris Agreement.

The full report is available at the Unfriend Coal Campaign site.

*1: The Unfriend Coal campaign is an international campaign that demands insurance companies to stop undertaking coal projects and making investments. The report on the scorecard is published annually by this campaign since 2017. 13 NGOs are active in it and JACSES is one of the participants from Japan. For more information, visit https://unfriendcoal.com/.